Welcome to The DCeric Show blog 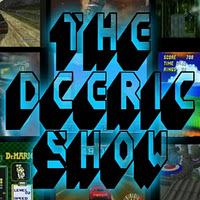 First off if you just came here by chance you may have come to a place you want to stick around.  This blog is dedicated to one of the greatest gaming shows on youtube.  Its dedicated to retro gaming and explains the history of the games aswell as memories i've had growing up playing them.  I came across this idea one day after looking at a screenshot of The Brady Bunch and thought about putting a picture of myself in each square as a joke then i thought of making a video of my face doing different things for each square.

Then i thought of the idea of putting video games in the squares and that actually hit off pretty well.  I thought if i was going to do that i mine aswell do something with this as there is no other reason for making a bunch of squares for video games.  So i pondered the idea of making a new game show dedicated to gaming.  At first it was going to do with everything gaming i then thought this was going to be a different idea altogether cause that idea was already used for my other project www.youtube.com/gamereviewify.

That was an interesting channel to work on but i ran into some minor problems with the computer and within the time i had to get that repaired i ran out of ideas for the show and thought it was a little bit harder to make.  So The DCeric Show had to be something completely different and i decided then i wanted to talk about my favorite games growing up explaining the history of games aswell my memories.  Now i hear from some people sharing your memories might be a weird idea indeed it might sound like that but often when i talk to somebody about a video the first thing that comes out of there mouth is a memory they had with the game and i believe that has something to do with me talking about my memories.

The show has been hitting off well with the last 6 episodes but i then decided with another idea.  After a couple people i have spoke to they were telling me that i should to shows on newer games.  Well i had explained that this show is a different idea and i wanted it to be different from Game Reviewify.  So then i thought thats okay if people want new games and i wanted to keep it different from Game Reviewify i'll implement a new show called The DCeric Show Gameplay.  Gameplay would feature gameplay of newer games so people got a hint of cool new games im playing and thought it would make people thinking about buying the game for themselves.

So i then spoke to a pal of mine and he had told me that my show is great why dont you put more games into to each episode and i then thought to myself well i dont implement Gameplay into the current show it would make more sense.  Well the idea is great it hasnt started yet cause i actually just thought about it last night so the next episode will now feature Gameplay apart of the current show.  It'll feature newer, rare, and indie games that i think will get people to watch out for newer episodes.

All my ideas came together quite well but i guess your wondering why i came up with the idea of using DCeric as the name for the show.  Well it first started out in a chatroom for my region in Oshawa Ontario they had a website call Durham Central aswell as a chatroom.  Back then i was a tad bit of a bad dude and often if you ever seen anybody in the room with "DC" attached to the name it meant your a admin so i was just there to tease the other users and make people think i was an admin.  I know bad thing to do but that was along while back and i no longer do things like that.

But anyways back to the nickname i once again used DCeric as a nickname for forums dedicated to Dreamcast like Dcemulation.com and Dcemulation.org i also used for other sites aswell for the longest time.  So the nickname had a very long history to it and i find it had more to do with gaming then it did that chatroom as "DC" meant Dreamcast and im a big gamer so it stuck and i thought im going to use my nickname for the show.  Some people may think its a bit odd but i had a hard time thinking of a name and  even though the name sounds weird people will enjoy it for what it is.

Well i have now come to the ending of this blog entry i really hope you enjoyed what you read about my show i think that even though my shows have a history about games my show has a history aswell and it deserves a read.  So now im going to leave you with the first episode of The DCeric Show and i will add all the other episodes to follow in the week.