$15 Sticker Coupon with any Purchase on Redbubble 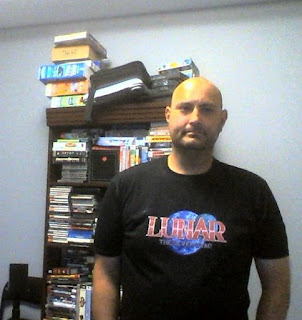 Today I'm here to give you a $15 dollar off sticker coupon with any purchase on Redbubble.  Get your favorite shirt and get yourself a nice package of stickers.  Its my favorite place to get some of my favorite shirts you see in my videos.

In this video I show you Tokyo Extreme Racer Advance for the Gameboy Advance which was developed by David A. Palmer Productions  and published by Crave.   This time taking a different developer then the usual Genki development and taking different producers for the North American and European releases.  I also don't believe the game was released in Japan and is unusual considering the series is more popular and started in Japan.  This is also the reason why you don't see Genki anywhere in this game.
A series that has a long range of games up to Import Tuner Challenge for North America on the Xbox 360 which sorry I didn't mention at all in the video.
I do want to mention about looking away from the camera at the ending take this as blooper :/ lol.  I thought I didn't hit record and just at that point looked at the screen to see I that I did and the video was made.
Posted by DCeric at 2:59:00 PM No comments:

In this video I show you The Little Mermaid for the NES. No I don't play the full game and I am really not sure how long the game is. With that being said I may have been pretty close to beating it in this video. I really do think people would enjoy this game. Its not overly difficult and can be beaten in one sitting. Well check out the video and let me know what you think.
Posted by DCeric at 5:22:00 PM No comments:

Somebody requested a game play video and it has been awhile so I thought about doing one today on Xeno Crisis for the Dreamcast. Just yesterday as of uploading this video the games physical copy was released for the Dreamcast. Today the image files for Dreamcast have been released. I purchased the image files so that's what i'm showing you here. If you want more information check out the video.
If your're interested and making a purchase for the Dreamcast version or any other systems check out https://www.bitmapbureau.com/ for more information.
Posted by DCeric at 5:54:00 PM No comments:

So a lot of people want to run 16bit software on Windows 10 and perhaps other versions of Windows. Thanks to Microsoft they stopped supporting it and removed it completely. However OTYA128 released a software called OTVDM which is a small piece of software that has Wine as a backend to run older software. In this video I show you how it works.