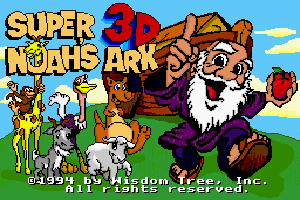 It used to be quite a rare title but my buddy Eleazar Galindo Navarro from Piki Interactive got the rights to re-release it for the Super Nintendo and now is trying to release this through Steam Greenlight. Hopefully we will see more Super Nintendo releases come to Steam. NO! I'm not talking of Super Mario Brothers although that would be awesome.

Vote for this game at:
http://steamcommunity.com/sharedfiles/filedetails/?id=287164593&searchtext=Noah%27s+Ark+3D

Get more games for a variety of consoles and PC at:pikointeractive.com