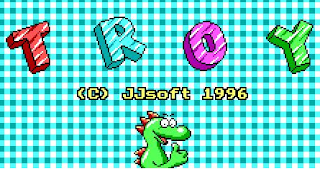 
Today I play Wacky Wheels for PC released by Apogee in 1994. The game was inspiration of Super Mario Kart which was released in 1992. The game was originally released for MSDOS and then released in 2015 part of the 3D Realms Anthology.

3D Realms Anthology is available at the following links

The following links are for Taewoong's Dosbox and JoytoKey

Today I test out Power Drive 2000 demo for Windows PC created by Megacom. This is an early beta/alpha of the game so there maybe some big changes to the game for its final release. If you have seizures turn away now just thought i'd live this warning there cause the the game warns everyone anyways.

On this episode I play Metropolis Street Racer for the Sega Dreamcast in which I had called Metropolis Street Racing numerous times. The video is long and explained really well even though I couldn't fit game play in for each mode.
Posted by DCeric at 1:57:00 PM No comments:

On this episode I play .Kkrieger which is a 96kb 3D first person shooter released in 2004 for PC created by The Produkkt. The games data was compiled into one tiny little binary.

Something tells me while making this video I needed to have a coffee cause I said the game was called Keurig in which its not. Also for some reason I just couldn't think of the word technically which of course yes this is a technically advanced game even though its from 2004. Well it was late while doing this and my brain tends to have major farts once in awhile.

I hope you enjoyed the video and if you at all feel interested in downloading the game you can get it at:


On this episode I play Sega Rally Championship for PC. The game was released in 1997 for Windows PC and was a port of the Arcade version created by Sega Races generally known as Sega.

The game also has official brand car licenses used for the cars in the game. The game may or may not need a no cd key to fix launch issues, however you will need to do some compatibility fixes to make this game run at 30fps or higher frame rate.

At some point I may do a tutorial fix to show how I got this game running like it is in the video for Windows 8 (x64). There maybe a few extra's in the game but this seems like a straight arcade port so the only extra maybe a bonus stage if you get first place on the third track.
Posted by DCeric at 1:03:00 PM No comments:

My friend Kevin requested a video of Vampire Chronicle for Matchmaking Service for the Sega Dreamcast. Well here it is for you to enjoy. This is a pretty rare game and I was pretty excited to get my hands on it and share it with you.

If you would like to get some awesome rare Japanese imports for the Sega Dreamcast look for Ryu Kenkars on Facebook.
Posted by DCeric at 2:23:00 PM 2 comments: